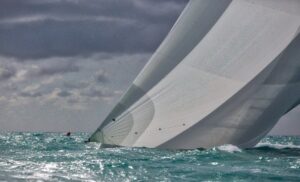 Saint Barthelemy – March 16, 2022 – Gustavia Yacht Club alongside partner Ulysse Nardin are proud to announce this year’s winner of photographic excellence, Steven Lapkin, for his original piece titled, Envie Bleue or Envy Blue.  Steven is a native Californian and graduate of USC. His work has been featured in Salingworld and Yachting magazines among many others. His winning work truly rises to the occasion of the contest’s theme, “Capture the Beauty of Sailing.” Lapkin will receive a Ulysse Nardin Marine Chronometer, a luxury timepiece that pays homage to the spirit of innovation, exploration and independence.

2022 marks the second year of The Annual Gustavia Yacht Club International Photography Contest, organized by the Gustavia Yacht Club. The contest is open to all professional photographers over the age of 18, regardless of nationality and photography style. The 2022 competition drew 56 submissions representing photographers from 17 countries. This year’s award ceremony takes place at the Brigantin Museum in Gustavia, St. Barts and will be attended by the Commodore of the Club: Sir Stelios Haji-Ioannou and President of the Jury of the competition  Milena Modigliani Perini. The jury panel is made up of esteemed members including Haji-Ioannou, Perini as well as Minou Weber, Bruno Gardien, Candy Miller, Henning Schwarzkopf, Chris O’Donoghue, Jean-Pierre Hennequet, Nils Dufau, Mrs. Trifiro, André Labarrère, Julie Diehl, Sébastien Le Ber, Ron Zarella, and Kate Holstein.

The Gustavia Yacht Club was established in 2016 by Sir Stelios Haji-Ioannou  (www.stelios.org ) and co-founder Jean-Pierre Hennequet to create a community for yachting and sailing aficionados. Since its establishment, the island has seen immense growth in numbers of international jet-setting visitors who favor adventures at sea.

Ulysse Nardin has a history of supporting a wide range of oceangoing and maritime initiatives, including sponsoring of the most prestigious yacht shows like the Monaco Yacht Show and the Fort Lauderdale International Boat Show, championing the nonprofit One More Wave and scientific research team at OCEARCH, as well as with superyacht companies and individual leaders in the space such as Northrop and Johnson.

President of Ulysse Nardin Americas, François-Xavier Hotier said, “Ulysse Nardin, Gustavia Yacht Club and winner of this year’s photographic contest, Steven Lapkin, all share the same passion for the water. Competitions like these remind us of our oceans’ beauty and our need to preserve them. Congratulations, Steven, on your winning image and your passion for boating and the seas.”

Sir Stelios , Commodore of the Gustavia Yacht Commented : “I am always amazed how all these incredibly talented photographers who participated in our competition can capture the beauty of sailing in such a way that most of us will never get the chance to see the same shot in real life. Sailing is a beautiful, environmentally friendly hobby for the many of us and a tough sport for those elite sailors captured in these photos. I would like to thank all of the photographers for taking part but in particular the overall winner Steven Lapkin. I would also like to thank Ulysse Nardin for being so generous with the prizes to the winners!

The Gustavia Yacht Club, a not for profit French organization under Loi de 1901, was founded in Gustavia, Saint Barthélemy, in 2016 by Sir Stelios Haji Ioannou, local resident Jean-Pierre Hennequet, and many others keen to offer such a facility to an island missing one until then.

It has since attracted a very international set of distinguished members, mixing locals, Americans and Europeans mostly. Many are boat owners and major other Yacht Clubs members, and all are boat lovers.

The club holds special events for its members on a regular basis in its premises as well as in London or Monaco and has signed a number of mutual use agreements with other Yacht Clubs internationally.

A list of our reciprocal arrangements can be found on this page:

Ulysse Nardin is the Pioneering Manufacture inspired by the sea and delivering innovative timepieces to free spirits. Founded by Mr. Ulysse Nardin in 1846 and a House of the international luxury group Kering since November 2014, Ulysse Nardin has written some of the most beautiful chapters in the history of Fine Watchmaking. The brand owes its reputation to its ties with the nautical world: its on-board marine chronometers are among the most reliable ever designed and remain very popular with collectors all over the world.

A pioneer in cutting-edge technologies and the use of innovative materials such as silicium, Ulysse Nardin is one of the few manufactures with the in-house expertise necessary to produce its own high-precision components and movements. An exceptional level of horological excellence has earned it a spot in the exclusive circle of Swiss watchmaking: the Fondation de la Haute Horlogerie. Ulysse Nardin is taking actions in two main ways to help conserve the oceans: reducing marine plastic pollution and developing scientific knowledge in shark conservation, animals which are its emblem.